A robust, clinical study on the effect of phytoestrogen, used in Naturaful products, on breast augmentation is conducted by medical doctors in South Korea. Although individual results may vary, the results look promising.

Breast Augmentation by The Effect of Phytoestrogen
Jin Wha Chung, M.D.
The Catholic University of Korea, Saint Mary’s Hospital Orthopaedic Department, Seoul, Korea
The phytoestrogen has the positive effect in osteoporosis, cardiovascular diseases, facial flushing and other postmenopausal symptoms. And the purpose of this study was to evaluate the effect of phytoestrogen in increasing breast size clinically and histological. The result show meaningful augmentation of the breast in group taken phytoestrogen tablets (PEITO) and in mouse study, study group showed more lobules and more duct cells in lobules than control group histological. The results mean phytoestrogen has weak estrogenic effect on the lobular structures of the breast tissue and finally increasing their size without any significant side effect
1. Introduction

Women’s breasts increase during adolescence and pregnancy, and to a lesser extent the same phenomenon occurs during the menstrual period. All of these are concerned with female hormones.

The breast increase resulting from hormones has been reported clinically among patients who take estrogen hormones, antidepressants and contraceptives. Furthermore, it is known that substances such as female hormones, prolactin and growth factors play a role in triggering these reactions, stimulating estrogen receptors distributed across lobules and modulating cell division and apoptosis.

Breast-augmentation surgery has been performed on premonopausal women for the purpose of beauty enhancement, that is, to increase the size of the breasts. However, issues such as high cost, post-surgery infection attributed to the materials inserted within the breasts, tissue rejection, have effectively limited the use of such procedures. Additionally, in recent years the use of estrogen, a female hormone taken by menopausal women, has decreased due to the increasing occurrence of breast and uterine cancers resulting from long-term use of the hormone.

Compared to estrogen, phytoestrogen originates in plants. Recently many foods and extracts containing this substance have been used for the treatment of menopausal symptoms, and it has been shown that phytoestrogen is effective in decreasing the frequencies of breast and uterine cancers, and in preventing osteoporosis and cardiovascular disease. Specifically, for Asian people such as Chinese, and for Japanese living in the United States, the frequency of breast cancer is low. Moreover, the occurrence of flushing--one of the menopausal symptoms--now stands at just 20%, dramatically lower than 80% of Western women. It is believed that one of the most significant factors is that phytoestrogen is contained in many foods common to Asian diets.

Since the 1980s, research on phytoestrogen has been led by American and European governments, as well as by manufacturers of soy-based foods. Thereafter, many menopausal women have taken phytoestrogen as a natural alternative in light of their concerns about the side effects of the hormonal treatment previously used. The Food and Drug Administration (FDA) of the United States declared in 1999 that foods containing soy proteins in excess of 25 grams (such as soy, soybean milk, tofu, etc.) have low amounts of saturated fatty acid and cholesterol, and that they are effective for preventing cardiac diseases. Lamartiniere et al. (1998) claimed that an injection of genistein, a type of phytoestrogen, into a mouse less than 50 days old promoted the differentiation and maturation of mammary glands and thus contributed to reducing the occurrence of cancer against a carcinogen. Wang et al. (1995) claimed that an injection of the isoflavone formonenelin into the mouse whose ovary was removed led to the increase of prolactin in blood plasma and thus the augmentation of lobules.

During our experiments in the induction of osteogenesis against osteoporosis, we speculated that if for young women who are premenopausal, taking phytoestrogen promotes the differentiation and development of mammary glands and thus augments the breasts, it could be an alternative against breast-augmentation surgery--which despite its wide use has been rife with side effects—and against other medicines. Therefore, we devised this experiment.

PEITO (Product of Belgium) was used in this study. One tablet of this product weighs approximately one gram (0.996±0.023 gram) and is composed of substances extracted from hops, buckwheat, fennel seed, rye, barley, etc. In order to analyse the ingredients of this product, it was grounded with a mortar and crushed with a homogenizer filled with 1 liter of 100% methanol, whereupon the effective substances within it were extracted. All these processes were repeated three times and the supernatant was collected, concentrated and then redissolved in small amount of methanol for a final concentration of 50%. Subsequently it was loaded on a column saturated with hydrophobic interaction chromatography resin. Consequently we confirmed through chromatography that this product contains a large amount of genistein and diadzein.

B Subjects and Methods

i) Experiment with premenopausal women
We had thirty premenopausal women ages 24 to 35 (mean age 27.3) take the PEITO tablets for 6 months continuously. They took 10 tablets daily--five in the morning and five in the afternoon--30 minutes after each respective meal. Participants’ weights and breast sizes were measured at the beginning prior to taking tablets, and again at three months and six months after taking them. The breast size was measured from [illegible] to the nipples in a standing posture, and the values of liver (SGOT/PT) and renal (BUN/Creatinine) function and cholesterol were compared through blood tests.

ii) Animal experiment with mice
Thirty female mice were divided into two groups: an experimental and a control group. They were 12 weeks old, 140-200 grams in weight, and of the Sprague-Dawley strain. For the control group we fed an assorted feed without beans (Shin Chon Feed, Kimpo Kyunggido) and tap water, while for the experimental group we added 10 ground-up PEITO tablets per day to the same diet used for the control group. We obtained lobules from the slaughtered mice after three months’ experiment. The lobules thus obtained were fixed by soaking in 10% formalin solution for 12 hours. Tissue slices 5 μm thick were obtained by common tissue-production procedures and subjected to hematoxylin & eosin (H&P) staining [some words illegible]. We first examined the nipple tissues under 40x magnification and, based on that, compared the number of lobules located in hypodermic muscular coat. We also compared the number of cells that are constituent of lobules under 100x magnification.

Statistically, we used the Bonferroni method for p value, with a negative estimate taken to indicate that breast size measured at a later time was greater than one measured in the former time (Table 1, 2). We checked the items listed on the blood test before and after the experiments, and no significant difference or abnormal condition was examined.

Table 1. Mean weight at each interval 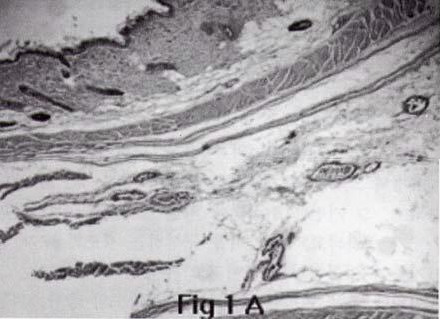 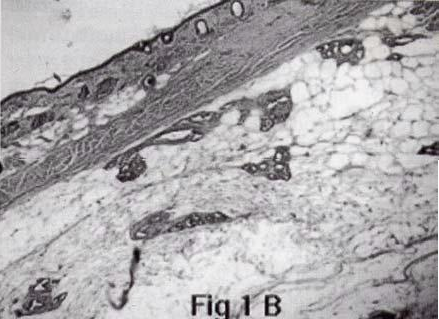 Cells of mouse breast tissue under 40x magnification (A: beginning, B: 3 months) 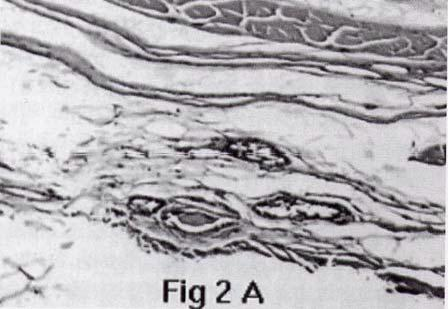 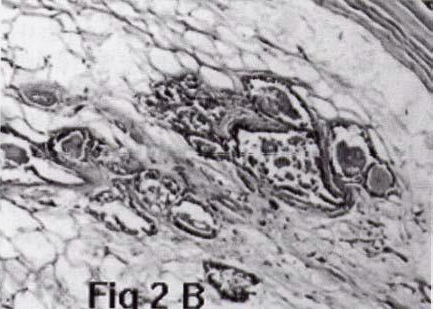 Cells of mouse breast tissue under 100x magnification (A: beginning, B: 3 months)
4. Discussion

Among the various substances that exist within plants, “phytochemical” refers to chemical substances that affect human health, and phytoestrogen is one such type. Although phytoestrogen typically does not have the same steroid structure as endogenous estrogen, it shows physiological characteristics similar to estrogen. Presumably this is attributable to its aromatic A chain of steroid. Phytoestrogen exists in all kinds of plants. As long as humans consume foods, they are inevitably exposed to phytoestrogen at all times.

Coumestan, lignan and isoflavon are representative substances of phytoestrogen, and among these the most studied isoflavon is contained in soy, tofu, etc., with genistein and daidzoin represented. These are absorbed within the stomach and converted into final products such as cauol and o- desmethyl-angolensin paraethyphenol. Of these, cauol is most similar to estrogen and functions by competitively binding with estrogen receptors. Although the affinity of phytoestrogen is not more than about 1/100,000 compared to endogenous estrogen, its concentration in the body is 100 times higher than the endogenous estrogen and thus it provides the effect of estrogen.

Meanwhile, phytoestrogen compounds serve as estrogen analogue in low concentrations and promote cell proliferation, but instead they provide anti-estrogenic effects in relatively high concentration. Additionally, these isoflavon compounds affect cell proliferation and apoptosis induction through various external stimulus factors such as mitogen and eyetokin, and this can be performed without binding with estrogen receptors.

The hormonal alternative treatment can increase bone density by approximately 3.5% to 5% in pre-and postmenopausal osteoporosis patients. The results of several studies show that in particular ipriflavon--a synthetic substance of isoflavon in phytoestrogen--helps patients to whom hormonal alternative treatment cannot be administered. Moreover, it has been shown to be effective against febrile flushing and atrophic vaginitis resulting from postmenopausal estrogen deficiency, and has even demonstrated its effectiveness against osteoporosis and cardiovascular disease. Consequently, research has shown that it can potentially serve as an alternative to the heretofore common use of estrogen.

Whereas all past research results were obtained through tests using menopausal women as subjects, the purpose of this experiment was to examine how taking this phytoestrogen benefits young women of the current day, particularly in terms of breast size. According to this experiment, taking phytoestrogen is associated with the breast enhancement of menopausal women, and its mechanism is presumably, as the results of mouse experiment show, the increase in the number of mammary glands and their constituent cells. Other than that, there were some subjective changes. For instance, women who took phytoestrogen reported that their breast increased, and that their skin and hair became more beautiful.

Meanwhile, no claim was made regarding side effects resulting from phytoestrogen. However, according to what has been reported so far, those who have allergies to soy-based foods may have indigestion or immune response after taking it. Therefore, we recommend that those who have had allergies to peanuts or soy-based foods in the past be cautious in taking phytoestrogen.